Treatment of Ehrlichiosis in Dogs

Ehrlichiosis is a tick-borne disease. It’s critical that the condition is detected early and treated. Our Flat Rock vets explain symptoms of ehrlichiosis in dogs, how it’s treated, and whether the disease can be cured.

Ehrlichiosis can develop in a dog if he or she has been bitten by an infected tick. Brown ticks have been found throughout the United States and Canada, and E. canis is considered to both southeastern and southwestern states.

Ehrlichia are a type of bacteria that can infect and reside within a host’s white blood cells. Ticks spread these bacteria from host to host. Since most antibiotics do not reach the inside of the cell where bacteria live, the bacteria are challenging to eliminate.

What are symptoms of ehrlichiosis?

Canine ehrlichiosis symptoms can be categorized into three stages. Signs will depend on which stage of the disease your dog is in:

This stage lasts between 2 and 4 weeks, during which your dog’s body will either eliminate the infection naturally or the condition will advance to the sub-clinical phase. You may notice symptoms such as:

Subclinical (no outward symptoms of the disease)

Though the organism is inside your dog’s body, your pooch may not display any outward symptoms of the disease. Subclinical is often the “worst” face as the disease progresses undetected.

Your vet may need to take a blood sample to determine whether there is prolonged bleeding at the puncture site. If the organisms are not eliminated naturally or with treatment at this stage, your dog’s infection may progress to the clinical ehrlichiosis stage.

If the organism isn’t eliminated from your dog’s immune system during the Acute or Subclinical phases, your dog may start to display any of these symptoms, including:

If the bone marrow (where blood cells are created) fails during this stage, significant issues can develop and your pup’s body will not be able to produce the blood cells needed to sustain life (white blood cells, red blood cells and platelets).

How is ehrlichiosis in dogs diagnosed?

Dogs can test negative during early stages of the disease, making ehrlichiosis difficult to diagnose early.

The immune system typically takes 2 to 3 weeks to respond to the organism’s presence and for a dog’s body to produce antibodies. Because of this timeline, your vet may need to test your dog at a later date to successfully detect antibodies and correctly diagnose the condition.

Many different tests may be used to learn which species of ehrlichia may have infected your dog. These will then be analyzed in our in-house lab, where we can get quick, accurate results efficiently.

By noticing clinical signs and detecting antibodies, your vet may be able to diagnose the condition if this is what’s truly causing your pet’s symptoms. More rarely, the organism will appear in blood smears or cell samples from the lungs, spleen and lymph nodes.

Baseline blood test, including blood chemistry and blood cell count may also be necessary. If your vet discovers anemia (high levels of the globulin protein, a low platelet count or low red blood cell counts) in the blood, this points significantly to ehrlichiosis.

How is ehrlichiosis treated?

If your vet finds that your dog has severe bleeding problems or anemia, he may require a blood transfusion along with treatment for ehrlichiosis.

Ehrlichia may also be infected with other diseases ticks can carry, such as Rocky Mountain Spotted Fever, Babesia or Lyme disease. Bartonella bacteria can also be found with ehrlichiosis and other tick-borne diseases. If your dog has any of these other diseases, he may experience more severe symptoms and it can be more complicated to diagnose the condition.

Antibiotics such as doxycycline are usually easily accessible and well-tolerated. Your dog may need to take these for about 4 weeks. Depending on your pup’s clinical state and blood parameters, steroids and other medications may be required for treatment.

Can ehrlichiosis in dogs be cured? Does it ever go away?

Several weeks of treatment are often needed to help a dog fully recover from ehrlichiosis. If ehrlichiosis is caught in its early stages, effective treatment can mean a very good prognosis for your dog. If symptoms were detected once the disease reached its acute or mild chronic phase, they should typically improve within 24 to 48 hours.

It’s possible for dogs to become reinfected, as immunity to Ehrlichia bacteria will not last long.

Can I prevent ehrlichiosis?

We highly recommend having your dog vaccinated against ticks and other parasites. Your vet can recommend the right tick prevention medications for your dog during his regular exams, and topical tick preventives such as Frontline Plus or Advantix can help. There are also chewable options such as Nexgard.

As this disease is exclusively tick-borne, it cannot be transmitted directly to humans from dogs (who can contract canine ehrlichiosis when bitten by ticks). But infected dogs may act as warnings to their owners that infected ticks live in the area. We also strongly recommend keeping your dog’s environment free of ticks, as much as possible.

Note: The advice provided in this post is intended for informational purposes and does not constitute medical advice regarding pets. For an accurate diagnosis of your pet's condition, please make an appointment with your vet.

Is your dog showing symptoms of ehrlichiosis or other serious illness? Contact our veterinary clinic to book an appointment for testing. Our Flat Rock vets are experienced in diagnosing and treating numerous conditions and illnesses. 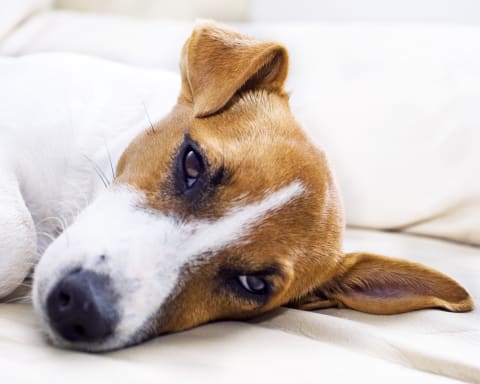 Help! My cat is breathing heavily, what should I do?

Dogs will often pant in order to cool down, but in cats this behavior is much less common and can be a symptom of an underlying health problem. Our Flat Rock vets share some of the reasons your cat might be panting or breathing heavily, and when to seek emergency care for your pet.

Reactions to Vaccines in Dogs & Cats

Any veterinary medical procedure will have some risk associated with it. That said, when it comes to vaccinations, in most cases the benefits far outweigh the risks. In today's post our Flat Rock vets share some common reactions pets have to vaccinations, and what to do if your pet has a reaction to getting their shots.

Fungal infections in cats can cause a wide range of alarming symptoms - and leave people and animals in danger of infection. Our Flat rock vets explain causes, symptoms and treatment for these conditions.

Many cat illnesses and symptoms can affect their long-term physical health and wellbeing, or even be fatal if not treated proactively. Our Flat Frock vets provide insight and advice on signs of illness.

Fungal pneumonia can lead to a number of symptoms including chronic cough, difficulty breathing, acute respiratory distress, and more. In this post, our Flat Rock vets discuss fungal pneumonia in dogs, including causes, symptoms and treatment options.

About Fungal Infection in Dogs

Fungal infections can affect your dog's breathing, skin, or internal organs making your pooch uncomfortable, and very sick. In today's post our Flat Rock vets explain a little about some of the most common fungal infections in dogs, their symptoms and how they can be treated.