What is ehrlichiosis in dogs?

Ehrlichiosis can occur in dogs that have been bitten by ticks infected with this disease. It’s imperative that it’s detected early and treated. Our Flat Rock vets explain ehrlichiosis symptoms in dogs, and how the disease is detected and treated.

Ehrlichiosis is a disease that develops in dogs that have been bitten by an infected tick. Brown ticks can be found throughout the United States and Canada, and E. canis is considered endemic to the southeastern and southwestern states.

Ehrlichia are a type of bacteria which infect and live within the white blood cells of hosts. The bacteria are spread from host to host via tick bites and are difficult to remove, as most antibiotics do not reach the inside of the cell where they live.

What are signs of ehrlichiosis?

Signs of canine ehrlichiosis can be classified in three stages: early disease (acute phase), sub-clinical (no outward appearance of disease), and clinical or chronic (long-standing infection).

This stage may last 2 to 4 weeks, during which the infection is eliminated or your dog will progress to the sub-clinical phase. Symptoms include:

In this phase, the organism is present but there may not be any outward signs of disease. It’s often considered the worst phase because the disease goes undetected.

It may take a blood sample to reveal prolonged bleeding from the puncture site. If the organisms are not eliminated in this stage, your pooch’s infection may move to the next stage - clinical ehrlichiosis.

Clinical ehrlichiosis happens when the organism isn’t eliminated by the immune system in one of the other stages. This stage can bring several potential symptoms, including:

This phase becomes hugely problematic because if the bone marrow (where blood cells are produced) fails, your pup will be unable to create any blood cells he needs to sustain live (platelets, white blood cells and red blood cells).

How is ehrlichiosis diagnosed?

Dogs in the early stages of this disease may test negative, making the infection difficult to diagnose early on.

Because the immune system usually takes 2 to 3 weeks to respond to the presence of the organism, and for antibodies to develop, it may take testing at a later date to detect antibodies and properly diagnose the infection.

Your vet may use a few different tests to find out which species of Ehrlichia are infecting your dog, then send the tests to our lab for analysis. Because we have an onsite lab and diagnostic testing at Western Carolina Regional Animal Hospital, we’re able to get results quickly and efficiently.

Though detection of antibodies, combined with certain clinical signs are your vet’s primary diagnostic criteria. More rarely, the organism will be detected in blood smears or cell samples from the spleen, lungs and lymph nodes. Baseline blood tests, including a blood cell count and chemistry should also be completed.

If anemia (low red blood cell counts, high levels of globulin protein or a low platelet count are spotted in the blood, this is a good indication that ehrlichiosis is the problem.

How is ehrlichiosis treated?

If your pup has severe bleeding problems or anemia, he may need a blood transfusion along with being treated for the disease.

Antibiotics such as the easily accessible and typically well-tolerated doxycycline may be used for about 4 weeks. Depending on your dog’s clinical state and blood parameters, different medications such as steroids may be required.

What is the prognosis for treating ehrlichiosis?

Short-term prognosis after effective treatment is typically very good. You should see your dog improve usually within 24 to 48 hours, if the disease was caught in its acute phase or mild chronic phase.

How can I prevent ehrlichiosis?

Prevention is the best medicine - so try to ensure there are no ticks in your dog’s environment by using topical tick preventives such as Frontline Plus or Advantix.

There are also oral chewable options such as Nexgard. Ask your veterinarian for recommendations on the right tick prevention medications for your dog.

Note: The advice provided in this post is intended for informational purposes and does not constitute medical advice regarding pets. For an accurate diagnosis of your pet's condition, please make an appointment with your vet.

If your dog is showing signs of ehrlichiosis, contact our office today to book an appointment for testing. Our vets are experienced in diagnosing and treating a number of illnesses and conditions. 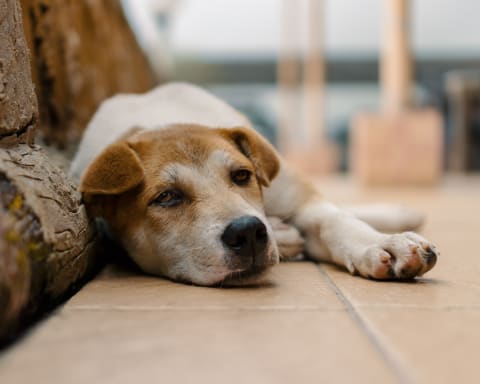 Joint pain can have a significant negative impact on your dog's quality of life and develop into a more serious condition. However, it can be challenging to detect early signs of joint pain in dogs, unless you know what to look for. Our Flat Rock vets share the types of joint pain seen in dogs, along with causes, symptoms and treatments.

How can I cope with my puppy's teething?

During the teething phase, your adorable four-legged friend is likely feeling some pain - and perhaps chewing on things they shouldn't. In this post, our Flat Rock vets offer a few tips on how to relieve your puppy's pain and navigate this challenging stage.

How to Stop & Prevent Periodontal Disease in Dogs

Periodontal disease can significantly impact your dog's oral health (along with his overall health and well-being). Today, our Flat Rock vets describe the disease and its symptoms, and how to prevent and treat the condition.

Tired of dealing with stinky dog breath? While bad breath is common in dogs, especially as they age, it can be a sign of a serious health issue in your pup. Here, our Flat Rock vets explain what causes bad breath in dogs and how to help prevent and treat it.

Joint pain can have a significant negative impact on your dog's quality of life and develop into a more serious condition. However, it can be challenging to detect early signs of joint pain in dogs, unless you know what to look for. Our Flat Rock vets share the types of joint pain seen in dogs, along with causes, symptoms and treatments.

Cat Limping - When to See the Vet

While cats are typically thought of as nimble, agile creatures, illness or misadventures can cause limping and discomfort. Today, our Flat Rock vets list a few reasons why your cat might be limping, and when to go to the vet.